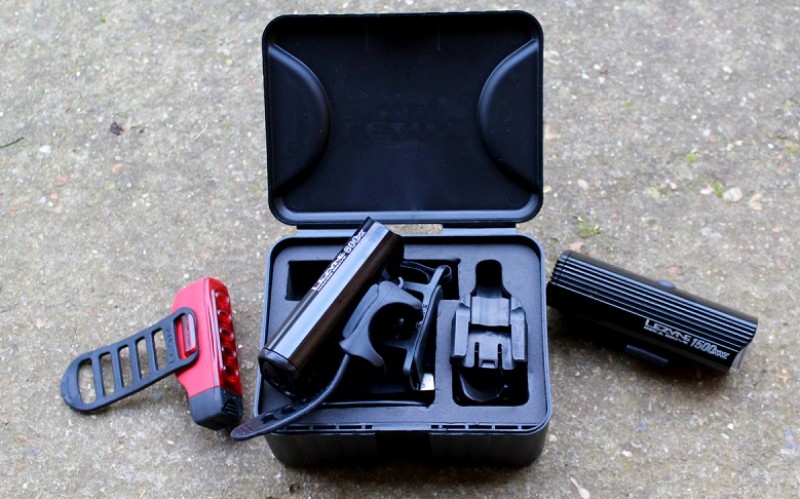 My lights bundle comes from US brand Lezyne, and is focussed on being an all-bases-covered setup, which could be used both on and off road, in a variety of combinations. For example, when off-roading, I helmet mount the Lezyne Macro Drive XL, handlebar mount the Deca Drive and use the Strip as a powerful rear light. By contrast, for city centre commuting, I can get away with the Macro Drive on flashing mode and the Strip Drive covering me from the back. It’s a versatile lights set, which has performed well during testing.

With 1500 Lumens of power, the Deca Drive sits at the top of the Lezyne Performance range of lights. It is designed to make a serious hole in the darkness!

In the past, I’ve tested the Lezyne Mega Drive; a similarly powerful unit, with similar ambitions. For 2015/16 though, Lezyne have shrunk the size of their range-topping front light, yet kept the power and improved the mounting. It is a great list of alterations, and heading into testing, I was expecting great things…

First of all, the reduced size. The Deca Drive is about 30% smaller than last year’s Mega Drive, and also markedly lighter. The size and weight of the Mega was quite noticeable, but the Deca XXL is a compact and perfectly weighted option. It sits comfortably on your bars, without owning the space. 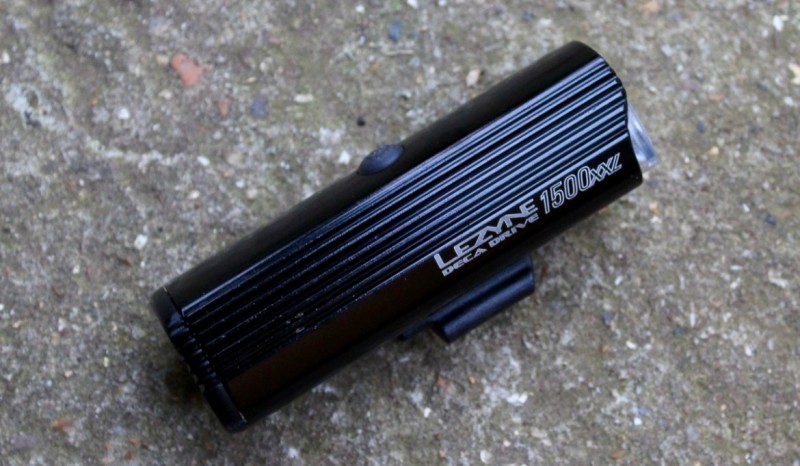 The reduced weight and size, has been achieved without any loss in quality or output though. The Deca Drive still houses its electronics within a bombproof CNC machined case, and it uses a simple rubber plug design to seal the USB charging port at the rear. The output comes in the form of three high power LEDs: these will pump out 1,500 lumens on overdrive, lasting 1hr45mins; 600 lumens on (my preferred) Enduro mode for 3hr30mins; or it will last an impressive 27hrs on pulsing mode. There are plenty of options, and plenty of power. Whether you’re looking for visibility in town or illumination on the trail, this should have you covered.

The pyramid of three LEDs used on the Deca, means that you get a more uniform beam pattern than you would a single LED or LEDs set in a line. Lezyne also claim that it increases side visibility, which is useful in traffic.

On the top of the light, the small power button doubles up as a charge indicator, and gives you plenty of warning when things are running low. Just give yourself plenty of time to charge the light up though, because it does take quite a while without the optional HE adaptor.

A final incremental improvement worth noting, is the upgraded mounting of the Deca Drive XXL. The handlebar mount is secure, rattle-free and mounts without tools. You can also get a helmet mount, as an optional extra; though personally I would suggest that despite the reduced weight, this is probably still a bit too hefty for headwear. 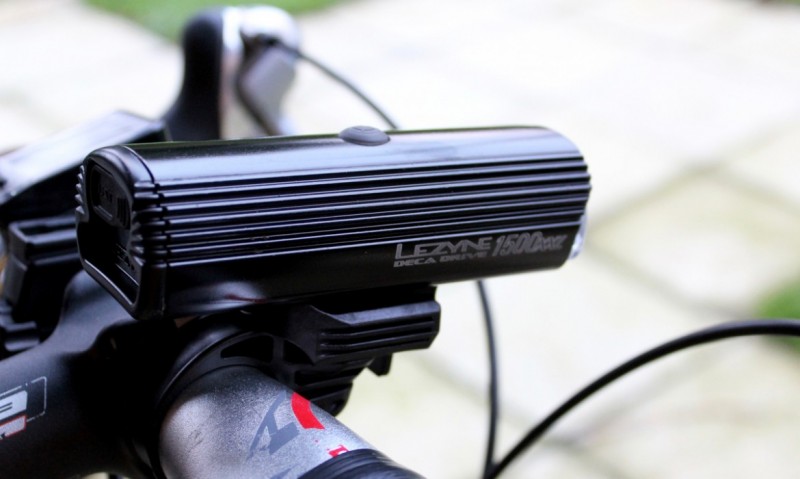 Overall, this is a high-end-light, with a high output, quality and a great design in all areas. Lezyne have demonstrated a number of lessons from their previous light models with the design of the Deca Drive XXL, and I really think this is now a polished product, which performs faultlessly.

I don’t understand riders that use thousands of lumens of power up front, but then a small safety light behind. What you want and need, is something that increases your presence to following traffic. The Lezyne Strip Drive Pro certainly does that! 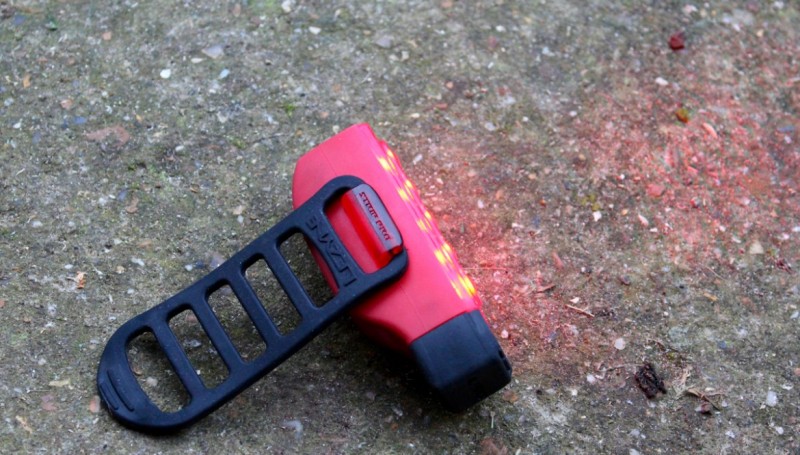 With five super power LEDs, set out in a strip, this pumps out up to 100 lumens on ‘Day Flash’ mode. That is incredibly bright for a rear light, and it will certainly get you noticed. Even in the standard flashing modes though, you still get between 30 and 50 lumens, which is sufficient to give good visibility, as well as around 5 hours run time.

Mounting is superbly simple. The rubber back of the light fits snuggly onto any seat post, aero or round, and then the rubber band will accommodate a multitude of post diameters. The design of the LEDs, means that they remain just as visible even when slanted down slightly on a seatpost. 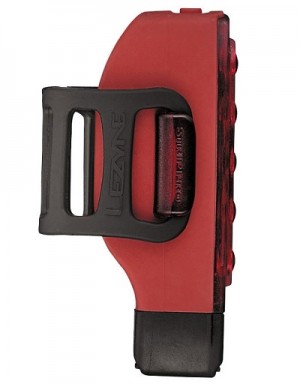 Battery life is good, although not stunning. The good thing, is that a small light within the strip indicates remaining fuel when you power down each time, so you’re kept up to date and can charge accordingly. The light also enters “economy” mode long before it will actually run out of juice, so it should get you home. The simple rubber bung design, covering the integrated USB charging stick, makes charging quick and easy.

Overall, one of the best rear lights that I have used. Powerful, versatile and durable. The Strip Drive Pro should get you noticed.

The third and final part of my set up is the Lezyne Macro Drive XL. It is a light from the ‘Sport’ line-up by Lezyne; and one that with 600 lumens of output, could either be used as a stand-alone front light or as a helmet mounted companion light. Output is adaptable and versatile too, with everything from a 63 hour run time on ultra-economy Femto mode, right up to 600 lumens on ‘Overdrive’. You’ve got a lot of options! 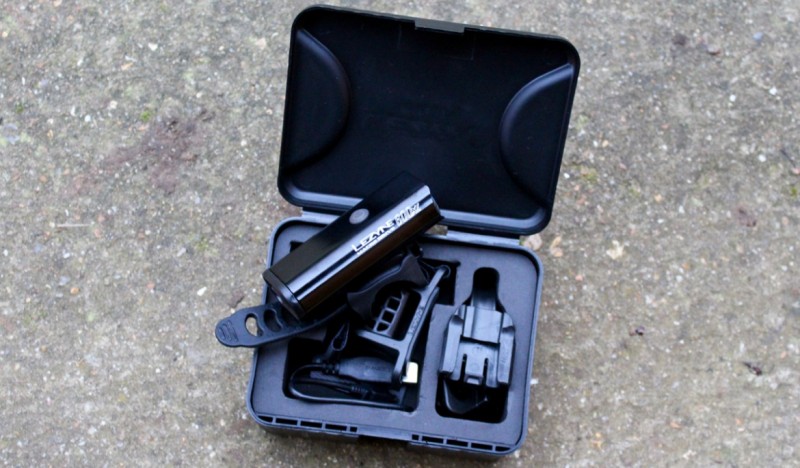 The Macro Drive XL ‘Loaded Kit’ that I tested, provides one of the most versatile front lights I’ve tried to date. With handlebar mounting through either a rubber band mount or a fixed composite clip mount (usefully the same mount used on the Deca Drive); as well as the option to use the light with a helmet mount, you’ve got plenty of choice. 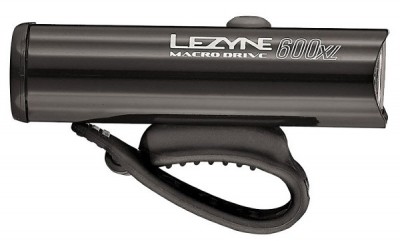 Similar to the Deca Drive, you also get a useful fuel gauge on the power button, as well as a simple rubber back plug for the USB charging port. It is a fool-proof, faultless design.

My only small criticism of the Macro Drive XL, is that when you use it helmet mounted, you’re required to use the elastic band mount as well. This tends to add a bit more height to the overall unit, as well as little more weight than some helmet mounting options. It’s nothing major, but just remember to duck a bit more with overhanging branches out on the trail!

Overall, another impressive lighting option. Whether it is as a ‘be seen’ light in town, or a ‘see better’ light out on the trails, this is a great compact unit that finishes off a great trio of lights for all riding disciplines.